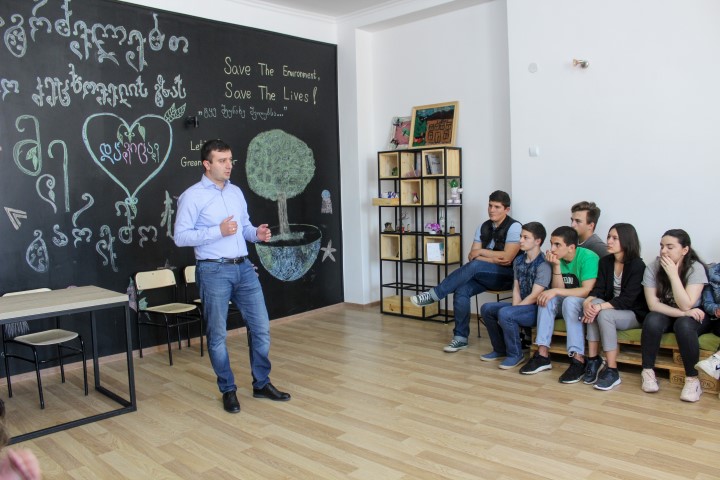 Giorgi Khojevanishvili,-the State Representative in Shida Kartli visited Gori Public School #1 and met with the pupils. In informal situation, the State Representative spoke with the pupils about European and Euro-Atlantic integration, the importance of education and his experience, answered the pupils questions at the end of the meeting.
The project ‘’Returning to School’’ is being implemented by the information center, about NATO and EU, within the frames of ‘’Europe Days’’. The project has been implemented since 2015 and includes high ranking officials’ ‘’returning’’ to their native schools, where they talk with pupils and teachers about the importance of European integration and partnership between Europe and Georgia.
In the frames of NATO and European days, many representatives of executive and legislative sectors have been involved in the project.

Building of a Vocational College is underway in Khashuri
In order to increase access to vocational education, a vocational college is being built in Khashuri, near the temple of Bana under construction. At ...
Restoration-rehabilitation of Historical Monuments is being Implemented in Ateni Gorge
Organized by the National Agency for Cultural Heritage Preservation of Georgia and with the financial support of the ‘’ Cartu’’ Foundation, historica...
Georgian strawberries and blueberries will be sold at the USA market
‘’Glenbury’’ Ltd., located in Kareli Municipality, is an enterprise which was founded by the financial support of the state and exports Georgian prod...
Tourist routes will be added to
Shida Kartli State Representative Giorgi Khojevanishvili met with the representatives of the United States Agency for International Development's Econ...
Top