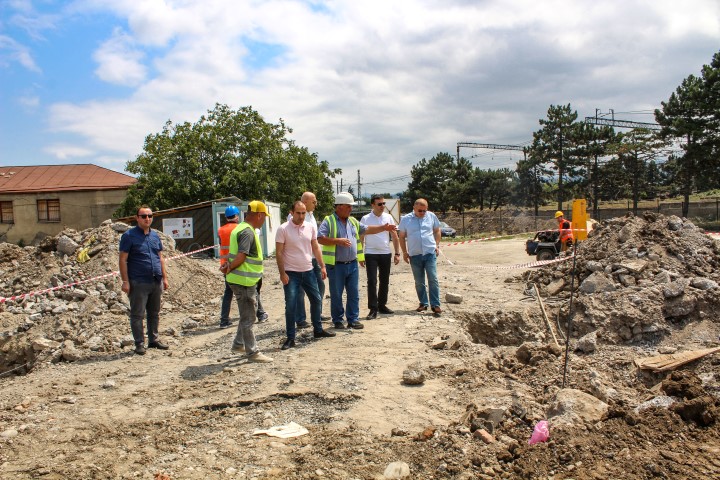 Shida Kartli State Representative  Giorgi Khojevanishvili inspected the ongoing construction and rehabilitation works in Khashuri together with the local authorities. The Municipal Development Fund of the Ministry of Regional Development and Infrastructure of Georgia has started construction of a stadium in compliance with international standards. Within the framework of the works artificial football field with sports lighting and irrigation system will be arranged on the territory. There will also be podiums and an open parking lot, auxiliary buildings will be built adjacent to the stadium. The project envisages arrangement of engineering communications.   Within the State Disaster Prevention Program,  a protective wall was built on the Suramula River near the stadium, which would significantly endanger the population in the event of heavy rainfall.

The State representative  also got acquainted with the construction process of the fences along the highway on Borjomi Street.     The project envisages renovation of existing fences at 2499 m / m. The works are implemented by the Fund of Projects to be Implemented in the Regions.  ‘’Many infrastructural projects are underway in Khashuri municipality and Khashuri in particular, some of which will be completed by the end of the year. In addition to the construction of shoreline dams on the Suramula,  is planned to carry out clean-up work on one of the strategic sections of the Suramula River in the small town of Surami, which will significantly reduce the risks of natural disasters. It is important to build a new stadium that will promote a healthy lifestyle of young people. It is noteworthy that various types of construction works are being carried out throughout the region, which is adjusted to the needs of both the population and the municipalities. "- noted Khojevanishvili.