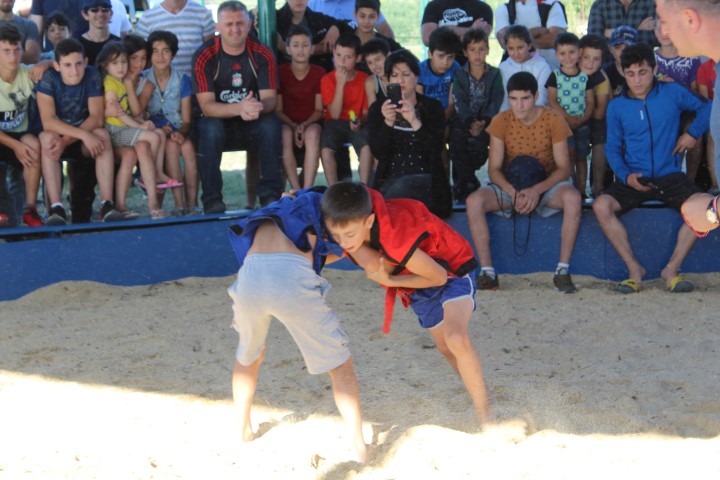 Wrestling tournament was held in Verkhvebi IDP settlement in Gori which was supported by Shida Kartli State Representative’s Administration and Eredvi Municipality. The wrestling arena was rehabilitated , communications were changed and the cover was changed last year. The wrestlers from Shida Kartli and  Mtskheta-Tianeti regions also participated in the tournament  together with the sportsmen of Eredvi, Tighvi and Kurta Municipalities. Giorgi Khojevanishvili,-the State Representative in Shida Kartli, his deputy,-Amiran Kristesiashvili and the representatives of the local government attended the activity. ,,Georgian traditional wrestling tournament had  constantly been held before 2008 war in Eredvi Municipality, this year we held it in Verkhvebi IDP settlement. The tournament is mutually important . on one hand, we have restored the tradition in fact and on the other hand, we promote popularization of sport.  I hope, we will gather for the next tournament in Eredvi very soon and the sportsmen will participate in it there as well’’,-noted the State Representative.
The winners of different weight categories were presented  with little gifts.