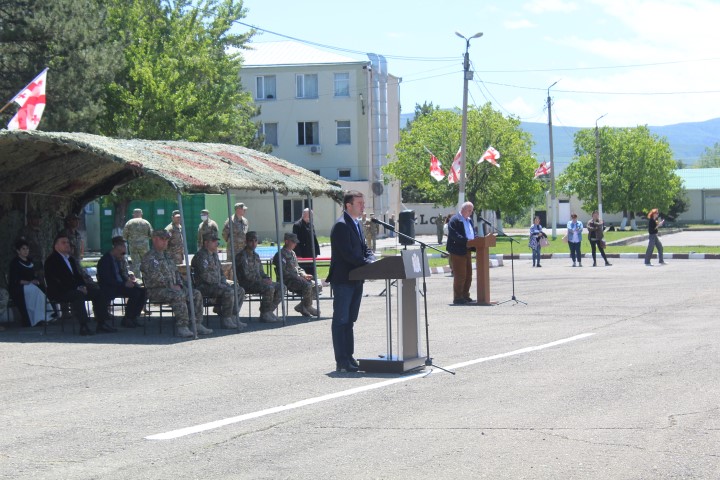 The State representative Giorgi Khojevanishvili congratulated the First Infantry Brigade on the Independence Day and thanked for their contribution to the country.

Shida Kartli State representative Giorgi Khojevanishvili and the Head of the First Infantry Brigade, Vice-colonel Roland Dzneladze congratulated the millitary personnel of the brigade on the Independence Day of Georgia.

Also, the brigade leadership and local government officials laid a wreath at the Heroes' Memorial and observed a minute of silence in honor of the country's struggle for independence and freedom, as well as the memory of Georgian fighters killed in international missions.

To celebrate the Independence Day of Georgia, the 1st Infantry Brigade was awarded military prizes and an exhibition of military equipment.

The process of taking grain crop started in Shida Kartli
In Shida Kartli region, in the villages adjacent to the occupation line, the harvest of head crops entered an active phase. The Ministry of Envir...
Building of a Vocational College is underway in Khashuri
In order to increase access to vocational education, a vocational college is being built in Khashuri, near the temple of Bana under construction. At ...
Restoration-rehabilitation of Historical Monuments is being Implemented in Ateni Gorge
Organized by the National Agency for Cultural Heritage Preservation of Georgia and with the financial support of the ‘’ Cartu’’ Foundation, historica...
Georgian strawberries and blueberries will be sold at the USA market
‘’Glenbury’’ Ltd., located in Kareli Municipality, is an enterprise which was founded by the financial support of the state and exports Georgian prod...
Top