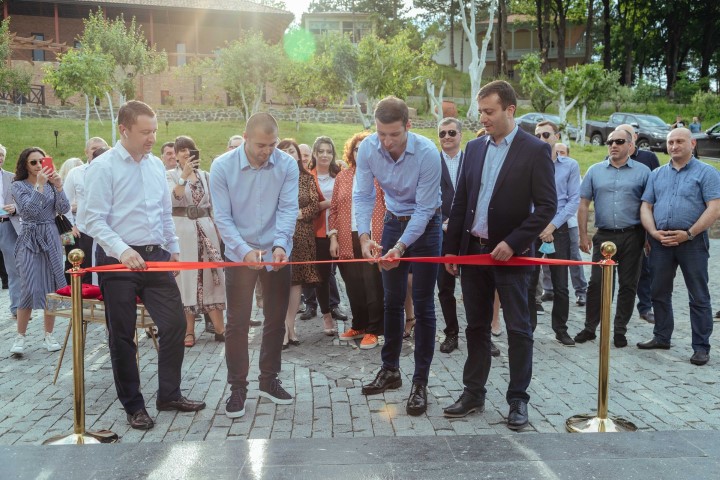 With the opening of the local tourism, with the support of the agency "Produce in Georgia", the hotel "Writers" has started operating in Shida Kartli, in the village of Kishkheti. The total investment volume of the project is more than 15 million GEL and the loan interest rate taken during the first 2 years will be financed by the agency "Produce in Georgia". At the 20-room hotel, 30 people have been employed so far, but in the future the hotel management plans to add up to 40 rooms and increase the number of employees. It is noteworthy that most of the employees are local.

The State Representative of Shida Kartli,-Giorgi Khojevanishvili, Irakli Nadareishvili,- the Deputy Minister of the Ministry of Economy and Sustainable Development of Georgia and Mikheil Khidureli,-Director of the ‘’Produce in Georgia’’ Agency attended the openenig ceremony.

“This is the first hotel of its kind in Shida Kartli, which is really important in terms of economic or tourist development of the region. I am sure that Kvishkheti and Hotel ‘’Writers’’ will be an attractive location for both foreign and local tourists,’’ said Giorgi Khojevanishvili.

The hotel has a restaurant of traditional Georgian dishes, lounge, conference hall, mini cinema and children's room. There are also two swimming pools, an open and covered balcony,  a playground and a helicopter landing pad.

The process of taking grain crop started in Shida Kartli
In Shida Kartli region, in the villages adjacent to the occupation line, the harvest of head crops entered an active phase. The Ministry of Envir...
Building of a Vocational College is underway in Khashuri
In order to increase access to vocational education, a vocational college is being built in Khashuri, near the temple of Bana under construction. At ...
Restoration-rehabilitation of Historical Monuments is being Implemented in Ateni Gorge
Organized by the National Agency for Cultural Heritage Preservation of Georgia and with the financial support of the ‘’ Cartu’’ Foundation, historica...
Georgian strawberries and blueberries will be sold at the USA market
‘’Glenbury’’ Ltd., located in Kareli Municipality, is an enterprise which was founded by the financial support of the state and exports Georgian prod...
Top